Starpharma today announced it has completed additional antiviral testing for SPL7013 against SARS‑CoV-2 in studies conducted in the laboratory of internationally recognised virology researcher, Professor Philippe Gallay, at the renowned Scripps Research Institute in the US.

The latest results confirm that when SPL7013 is applied at the concentration of the SPL7013 COVID-19 nasal spray, it has potent virucidal activity, inactivating more than 99.9% of SARS-CoV-2, the virus that causes COVID-19.

These data expand on the previously announced (see previous ASX announcement – 25 August 2020) data showing that SPL7013 has potent antiviral activity and inhibits infection of host cells by SARS‑CoV-2 when the compound is applied to the cells either before or after exposure to the virus. Earlier testing also showed that SPL7013 has a very favourable and high selectivity index[1] (up to ~2200), indicating potent antiviral efficacy with minimal cellular toxicity. The high selectivity index of SPL7013 compares very favourably with the selectivity index against SARS-CoV-2 reported in the literature of 279 for remdesivir and 55 for hydroxychloroquine.[2],[3]

Dr Jackie Fairley, Starpharma CEO, commented: “We are delighted to be working with Professor Gallay to expedite the development of this important product. These latest data show that at clinically relevant concentrations (at the concentration of the SPL7013 COVID‑19 nasal spray), SPL7013 inactivates more than 99.9% of SARS-CoV-2, which represents a compelling feature for the product. This potent virucidal action is consistent with the activity seen for SPL7013 in other viruses, including HIV and HSV.”

Professor Gallay commented: “We have been working with Starpharma for a number of months now and are impressed with the antiviral data generated in our lab for SPL7013 against SARS-CoV-2. It is particularly exciting to see a product show such a potent and clear virucidal effect against this highly infectious virus, and for its antiviral activity to be present when SPL7013 is added either before or after exposure of cells to the virus.”

Dr Fairley added “Starpharma’s COVID-19 nasal spray has potential to be an important near-term preventative product, and given it is based on an already marketed active, its path to market is both faster and less complex than a completely new product. Another attractive feature of Starpharma’s SPL7013 COVID-19 nasal spray is that it is entirely complementary to other prevention measures such as PPE and vaccines. It also has special relevance where social distancing is not possible such as crowded environments and certain workplaces. The importance of having multiple preventative product strategies has been highlighted by the recent challenges with some vaccine trials. Starpharma’s topical antiviral nasal spray could play a role both prior to vaccines being available, and complementary to vaccines once available to further reduce risk.”

Starpharma is expediting the development of the SPL7013 nasal spray and has already completed reformulation, pilot product manufacture, selection of device and packaging components, identification of manufacturer and compiled regulatory documentation in preparation for submission (see previous ASX announcement – 25 August 2020). The company has also commenced commercial discussions across a range of distribution channels and customer groups (e.g. B2B, online platforms) and expects that the product will be ready for market in 1H CY2021. 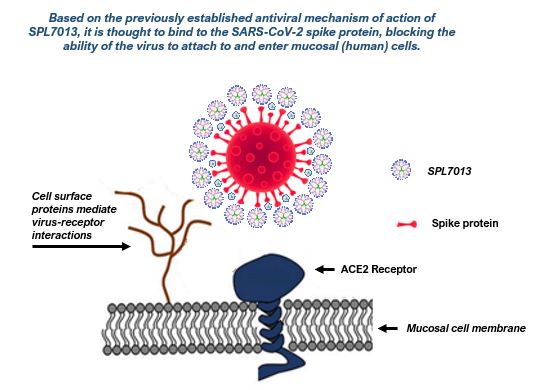 Scripps Research Institute is ranked the most influential institution in the world for its impact on innovation. Scripps’ researchers lead breakthrough studies that address the world’s most pressing health concerns. In 2018, Scripps Research was ranked top stand-alone scientific institute in the United States for producing high-quality research by Nature Index, based on discoveries published in leading scientific journals.

SPL7013 is a broad-spectrum antiviral with potent SARS-CoV-2 activity and is also the active in VivaGel® marketed products approved in UK, Europe, Asia, Canada, Australia, and New Zealand. SPL7013 acts early in the viral replication cycle and has virucidal activity against SARS-CoV-2 with antiviral activity evident when used either before or after exposure of cells to the virus. SPL7013 inactivates viruses by blocking the interaction between viral surface proteins and the human cell receptor proteins. SPL7013 has broad spectrum antiviral and virucidal effects, with activity demonstrated against a range of viruses, including HIV, herpes simplex virus (HSV), human papillomavirus (HPV), adenovirus, H1N1 influenza virus, hepatitis B virus (HBV) and Zika virus.

Given the broad antiviral activity, a SPL7013 nasal spray also has potential for application beyond SARS-CoV-2 for other common respiratory viruses, and could be useful in pandemic preparedness in the future. The SPL7013 nasal spray has the potential to complement vaccine strategies to further reduce risk by preventing acquisition and transmission of SARS-CoV-2, and play an important role in reducing transmission for the broader population and especially for frontline workers in the health, aged care and other industries such as travel. Whilst the initial focus is on a nasal spray as the most rapid path to market, the company also notes that SPL7013 could be applied via other routes of administration, such as ocular, nebulized (inhaled) or injection. The SPL7013 active is patented by Starpharma in major markets, and a specific patent application has been filed for the COVID-19 nasal spray. Starpharma recently announced the award of $1 million in matched funding by the Australian Government’s Medical Research Future Fund Biomedical Translation Bridge Program.