A new iron intervention study has determined which of the world’s low-and-middle income countries would benefit from using iron-containing micronutrient powders to tackle childhood anaemia.

Using advanced computer simulation techniques, the study’s findings include individual reports for 78 countries – predominantly in Africa, Asia and Latin America – showing where the use of micronutrient powders would offer a net benefit, and where the intervention could cause more harm than good.

This is vital information for governments aiming to efficiently and cost-effectively reduce the burden of anaemia in their countries.

Published in Lancet Global Health, the research was led by Walter and Eliza Hall Institute researcher Associate Professor Sant-Rayn Pasricha, who is also a haematologist at The Royal Melbourne Hospital. It involved an international consortium of experts from Queensland University of Technology, Imperial College London, and Emory University, the Centre for Disease Control and University of Pennsylvania in the US. 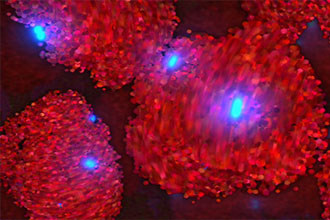 Iron is an important component of the protein haemoglobin, which is contained in red blood cells and carries oxygen around the body. Image from Haemoglobin and Sickle Cell Anaemia WEHI.TV animation.

Dietary iron deficiency is considered the major cause of anaemia in children worldwide and iron-containing micronutrient powders, that can be mixed into food, are currently the main intervention recommended by the World Health Organization for combatting the widespread problem.

However, because iron is essential for certain pathogenic micro-organisms to thrive, there is data that the use of micronutrient powders may exacerbate the risk of diarrhoea and malaria in children, potentially causing more net harm than good.

Dr Pasricha said the international research team set out to answer the question of whether micronutrient powders offered a net overall benefit on health outcomes in children when the associated risks from infection were taken into account.

The findings point to the importance of not taking a blanket approach. The reports produced for each of the 78 different countries provide policymakers with accurate, actionable information that balances the expected benefits on anaemia reduction against possible risks of infection.

Associate Professor Pasricha said the study would not have been possible without advanced computing and the expertise of a multidisciplinary team including mathematicians, health economists, paediatricians and nutrition experts.

“It was an amazing team that came together to make this research possible. It was also really exciting to harness the power of cutting-edge computer simulation to make sense of data sets so large they would have taken more than 15,000 years to manually assess.

Through a comprehensive microsimulation analysis, the researchers were able to integrate huge amounts of data from each country on anaemia, malaria and diarrhoea, as well as health care and public health information. This enabled them to simulate potential outcomes for five million children per country and determine the net health benefit (or harm) and cost-effectiveness of using micronutrient powders in different settings from Mongolia to Madagascar.

“Our hope is that the reports are readily accessed and put to good use by leaders, policymakers and donors the world over to help countries save time, money and most importantly, lives in the fight against anaemia,” he said.