Diabetes treatments could be improved following the development of a dramatically modified form of human insulin, called ‘Mini-Ins’, that successfully mimics the ultra-fast-acting properties of cone snail venom insulin.

Mini-Ins has demonstrated significant promise in laboratory models, rapidly lowering blood sugar levels after meals. It is well-tolerated by the immune system and lacks any propensity for long-term side effects – vital considerations when developing new diabetes treatments.

The study was a collaboration between the Walter and Eliza Hall Institute of Medical Research and the University of Utah, along with researchers from Australia’s University of Melbourne, La Trobe University, Flinders University and Monash Institute of Pharmaceutical Sciences. It was published today in Nature Structural & Molecular Biology. 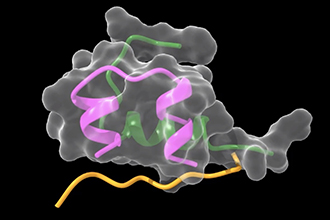 The Institute’s lead researcher on the study, Professor Mike Lawrence, has been investigating the structure of insulins and their receptors for two decades.

“We have completed the translational step from a cone snail venom insulin to a human look-alike, Mini-Ins, that is safe and well-tolerated by the immune system.”

“Our findings also showed that Mini-Ins doesn’t activate the related insulin-like growth factor pathways that would increase the risk of cancer – something researchers need to absolutely avoid when developing new insulin treatments for diabetes.

“Even at this early stage of development, Mini-Ins was able to lower blood sugar levels as fast as the current best treatments that are in use. This tells us that with further development the response time could be made even shorter. For diabetes patients this could be life-changing,” Professor Lawrence said.

According to the World Health Organization, diabetes impacts more than 422 million people worldwide. For many people living with diabetes, it can be challenging to consistently manage blood sugar levels by injecting insulin well before commencing each meal.

As a consequence, some people with diabetes find it hard to follow through with the injection regime, said Professor Lawrence.

“Our goal is to improve insulin treatments by shortening the timeframe it takes for them to work.”

“Achieving this would help people with diabetes to more easily manage their condition which would in turn lead to better health outcomes,” he said.

Working closely with Professor Lawrence at the Institute is Dr John Menting, who has been involved for years in the research leading to this exciting milestone.

“In 2016, along with our colleagues at the University of Utah, we successfully showed how cone snail venom insulins avoid the structural changes seen in human insulins.

“Developing Mini-Ins was like engineering an old machine to include modern components.”

“Just like in engineering, our process required detailed images to know which ‘design changes’ to make.

The US San Fransisco-based biotechnology company Monolog is now progressing the Mini-Ins proof-of-concept towards the development of a therapeutic version that is safe and effective in humans.

Professor Lawrence said these were exciting next steps and that a future version of Mini-Ins could end up being used by patients around the world.

“The aim of this next phase is to progress treatment to clinical trials and hopefully, one day, achieve a safe and effective insulin treatment that works even faster than the current gold standard.

“Even being able to halve the pre-injection timeframe would make a huge difference for people living with diabetes,” he said.