This event provides the chance to reflect on the achievements of the year and hear more about the future plans and initiatives for BioMelbourne Network and our vision for Melbourne. 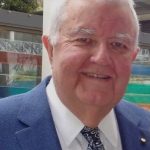 Last year’s event had a great turnout of over a hundred valued member representatives which provided a fantastic opportunity for networking.  We hope you can join us in 2018!

This is a free event and is for representatives of current BioMelbourne Network member organisations only.  You can check if your organisation is a member by clicking here.

Please note that we can accommodate up to four representatives from each member organisation. Feel free to register below and we’ll let you know if your organisation has reached its quota.

Professor Ian Chubb was Chief Scientist for Australia from May 2011 to January 2016.

From January 1986 to September 1990, Professor Chubb was the Deputy Vice-Chancellor of the University of Wollongong and Honorary Professor of Biology. During the period 1978-1985 he was a staff member in the School of Medicine of Flinders University. Before that, he was at Oxford University between 1971-1977: as a Wellcome Foundation Scholar (Christ Church), a Junior Research Fellow of St John’s College, and a Royal Society Research Fellow. He spent 1969-1971 as a JF & C Heymans Research Fellow at the University of Ghent, Belgium.

He was Chair of the Commonwealth’s Higher Education Council from September 1990 to December 1994 and was, until mid-1994, Deputy Chair of the National Board of Employment, Education and Training.

In 1999 Professor Chubb was made an Officer of the Order of Australia (AO) and in 2006 a Companion (AC) in the order for “service to higher education, including research and development policy in the pursuit of advancing the national interest socially, economically, culturally and environmentally, and to the facilitation of a knowledge-based global economy”.

Professor Chubb was awarded a Centenary Medal in 2001, and was the ACT’s Australian of the Year in 2011.