DEP® irinotecan is a novel, patented nanoparticle formulation of SN-38, the active metabolite of irinotecan. The drug is based on Starpharma’s proprietary DEP® drug delivery technology, which uses highly branched polymers (dendrimers) to improve the performance of anti‑cancer medicines, both in terms of efficacy and reduced toxicity including myelosuppression (e.g. neutropenia). Standard irinotecan has US FDA “Black Box” warnings for both neutropenia and severe diarrhoea.

DEP® irinotecan is one of three DEP® products in clinical development by Starpharma, and is currently in a phase 1 / 2 clinical trial at leading UK hospitals, The Christie, The Royal Marsden and Newcastle Freeman Hospital. Starpharma also has a partnered DEP® candidate with AstraZeneca – AZD0466, a novel Bcl2/xL inhibitor – which is expected to enter the clinic later this year.

Lynparza® (olaparib) is a first-in-class PARP inhibitor (inhibiting poly ADP ribose polymerase, an enzyme involved in DNA repair). It is approved for use in ovarian and breast cancer, and is currently being developed for use in multiple other cancers. Marketed by AstraZeneca and Merck, Lynparza® had sales of US$647 million in 2018, with sales forecast to exceed US$1 billion in 2019[1], despite its current approval in only two indications.

Irinotecan, which works through a different anti-tumour mechanism to olaparib is a topoisomerase inhibitor primarily used to treat colorectal cancer. Colorectal cancer is one of the most common cancer types; however, it remains an area of significant unmet need with few treatment options. Camptosar® (irinotecan) achieved peak annual sales of US$1.1 billion.  There has been keen interest from both clinicians and potential partners in DEP® irinotecan including in combinations with existing products, and this new data will feed into those discussions and the clinical development program for the product.

Dr Jackie Fairley, Starpharma CEO, commented: “We are delighted with the impressive results seen with DEP® irinotecan in combination with Lynparza® in this refractory human colon cancer model. DEP® irinotecan is currently in clinical development, and has previously demonstrated compelling results in both colon and pancreatic cancer models. The synergistic anti-cancer effect seen in this study supports earlier data generated showing significant benefits with Starpharma’s patented dendrimer formulations in combination with other marketed anti-cancer drugs. The enhanced effects are thought to be due to the improved pharmacokinetics and increased drug-tissue levels (tissue targeting) achieved with dendrimer delivery.”

Lynparza® (olaparib), as a monotherapy, had no effect on growth of the HT-29 tumours and minimal, if any, added benefit on the efficacy of standard irinotecan (figure 1). However, when Lynparza® (olaparib) was used in combination with DEP® irinotecan, the enhanced anti-tumour activity observed was also greater than the effect of each individual treatment alone, but was also greater than the more typical additive effect of two anti-cancer agents together. This statistically significant synergistic effect was observed in both the low-dose and high-dose DEP® irinotecan + Lynparza® (olaparib) treated groups (figure 1; P<0.0001).

Notwithstanding the statistical significance of the efficacy of DEP® irinotecan alone, the addition of olaparib to DEP® irinotecan provided an ever greater level of tumour efficacy, with regression of tumours seen with both doses, as illustrated in figure 1 (P<0.0001). This was despite being dosed at significantly lower levels than the maximum tolerated dose (most efficacious dose). No other groups exhibited tumour regression in the refractory colon cancer model. 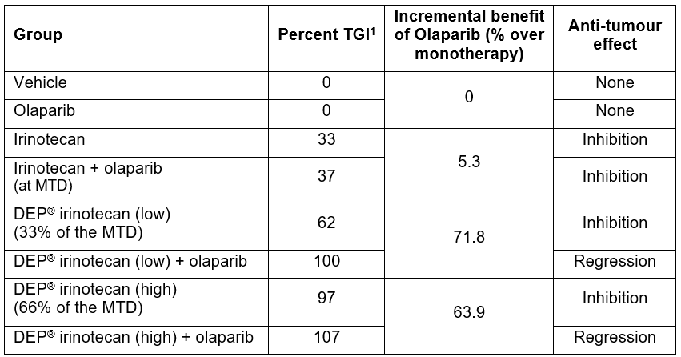 The mouse xenograft study used a HT-29 cell line (irinotecan-refractory human colon cancer cell line) and was conducted for Starpharma by an internationally recognised translational cancer group. A xenograft study uses human cancer cells, which are then implanted in a mouse, and is a well‑established means of assessing efficacy of anti-cancer therapies before clinical trials.

Balb/c mice were inoculated subcutaneously with the human colon cancer (HT-29) cell line (10 mice/group). Mice were dosed with saline (vehicle), DEP® irinotecan (low and high dose), and irinotecan (Camptosar®) (80 mg/kg) IV once per week. Olaparib (Lynparza® 50 mg/kg) dosed PO (per oral) five times per week (5 days on/2 days off)[3]. Irinotecan (Camptosar®) and olaparib (Lynparza®) were dosed at the pre-determined maximum tolerated dose for the combination; however, DEP® irinotecan doses were deliberately reduced in this experiment to allow for demonstration of synergy and were approximately one third (low dose) and approximately two thirds (high dose) of the maximum tolerated dose of single agent when used in this combination.

[2] For intellectual property reasons, doses of DEP® irinotecan are not disclosed

[3] Lynparza® doses were reduced if required in the highest DEP® irinotecan + olaparib dosing group (3/10 mice missed 1-2 olaparib doses during weeks 2 and/or 3 due to tolerability.