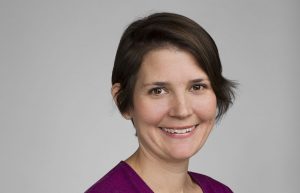 Dr Jacki Heraud-Farlow, from SVI’s Cancer & RNA Biology Laboratory, has been named as the second recipient of the Christine Martin Fellowship, funded by 5point Foundation. The Fellowship has been designed specifically to support an outstanding female researcher working at SVI who has experienced a career disruption.

Jacki is one of SVI’s ‘Rising Stars’, recognised for her excellence as an early career researcher both at the Institute and further afield. Her work is focused on a genetic condition called Aicardi-Goutières Syndrome, which affects young children and results in severe mental and physical handicap and early death.

The Fellowship is funded by the philanthropic 5point Foundation and was named in honour of Christine Martin, the late wife of former Director, Professor Jack Martin.

Mr Martin McIntosh, Chair of 5point Foundation, says that the Foundation’s vision – to positively impact the health, wellbeing and education of children and families – mirrors the values that Christine Martin held.

Asked about the significance of the Fellowship for her, Jacki says, “This award recognises that it is tough to stay in research when you have a young family. I love what I do and see it as a privilege. I have three beautiful daughters, a 5-year old and 2-year old twins. And I’m really proud that they get to see their mum doing a job which she is passionate about and makes a difference. I’m also really excited about the research I’m doing; there is currently no treatment for Aicardi-Goutières Syndrome, but I hope that my research can shed light on the disease. This Fellowship gives me the gift of time to focus on what matters.”